Dr Wee Horng Yen or Dr Benjamin Tham? I recovered enough from my shock of being pregnant to google for recommended gynae / gynecologists in Singapore. Preferably in the Novena area.

My friends recommended Dr Benjamin Tham at Thomson Medical Centre (TMC), but he’s super busy and the next available appointment was in like… 2 weeks?! I think I would have gone insane wondering what to do in 2 weeks.

I did more research and found a forum thread talking about Dr Wee Horng Yen at Novena Medical Centre. He seems to come with a lot of happy recommendations. I called the clinic up and hoped that he has a slot for me. And he did!

I showed up one morning, all nervous. The husband was cutely nervous too. We can’t wait to hear what he has to say about the pregnancy and if everything’s ok.

He was very kind. When he spoke, he spoke to the both of us (not just to me). He made my husband feel included – which was important. After a short Q&A, he brought me to the UltraSound Scan table where I’ve seen many other women lie on before (can’t believe it’s my turn to lie on it and have my tummy scanned). Here’s the baby: 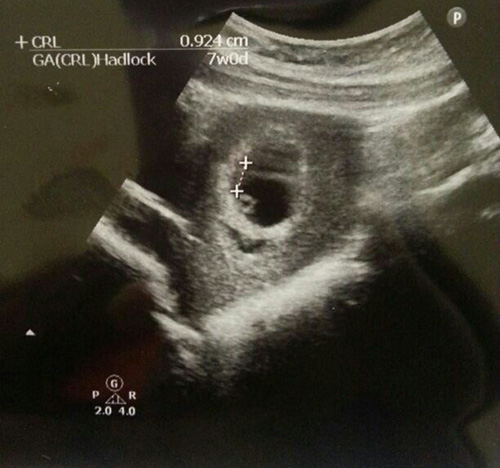 It’s about 7 weeks old. I can barely see much but the pregnancy is confirmed as he detects a waterbag. My EDD is estimated early 2014. Eeps. So soon!

Dr Wee Horng Yen said there’s some excess water outside my waterbag and I’ll have to come in again in about 2-3 weeks to see if the water clears up on its own. It should clear up on it’s own. I hope it does. How worrying. :(((

The cost was: $187.25 nett (Consultation, Ultrasound and Counselling). I only got a hard copy of my baby scan which I kept close to me throughout the day.

My friend commented that it’s kinda expensive and since we aren’t really required to be tied down to any gynae at this point, we were happy to keep looking.

P.s.: Update, we decided on Dr Benjamin Tham at TMC!