Home » Things to do in Bali: Mount Batur [Part1] 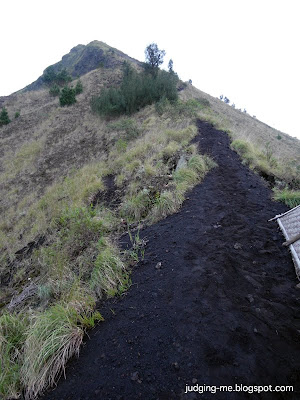 This is an amazing experience everyone should try at least once! It’s not easy but when you make it to top, it’s liberating. The picture above, is taken when we were already at the very very peak!
We were picked up at 1.45am from our hotel lobby and ferried to the base of Mount Batur in under 2 hours. It was pitch black!

The climb started easy at about 3am. Easy because it was mostly walking on flatland on volcanic ashes.

I was saying how bad it was of us to get Opin, the tour operator, to help us carry the 1.5L bottle of water and my friend said, “I can’t even protect myself and I have to care for another bottle?!” So that got us laughing which also meant that the trek at beginning was really easy.

To get us 3 up there, we had a grand entourage of 3 men! Which actually, on hindsight, should have been scary.

Mom, stop freaking out if you’re reading this. I have not even mentioned about the group of men at the base of the mountain!! Ok ok now you can freak out.

So there was Opin, whom we booked this tour with. He was really sweet. He came along with us for a workout and also because we’re girls.

And there was the liscensed mountain guide, and the guy selling drinks. 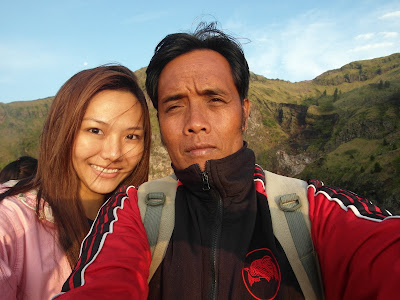 A picture of me and *omg I forgot his name* aka the mountain guide. He warmed up to chit chat during the later part of the trip when we were going down. He is 38 with 3 kids and eldest being a 17 yr old! Lucky man! And he gave me these eyes that were so sympathetic when he heard about my previous relationship. LOL. So cute.

So, the climb took us 2.5 hours. As we got nearer to the top, things got more difficult. The trekking got steeper and more slippery (due to the presence of small volcanic rocks). The mountain guide helped Wei Shan a lot and the drinks man helped Angeline alot. So they were all really very nice. Opin was just happily playing music on his phone and making stupid jokes/enjoying the climb. LOL

We stopped for breaks more too the higher we got. From breaking every 30 mins to 15 to 5 mins. I will be posting more pictures on how the journey is in another post because there are really just too many photos!

Anyway, let’s speed bullet forward 3 hours and chang-chang! We are at the top already. The air was REALLY fresh and it felt so good. I got loads of oxygen and it was just, very refreshing. I wasn’t tired or sleepy. Just felt very energetic and charged you know. Who wouldn’t be as happy as me to finally reach the top and gaze back on the path I conquered? 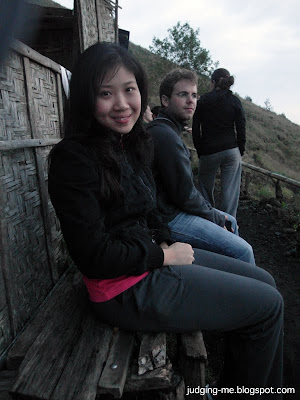 This is such a nice photo of Wei Shan that I had to post it. The guy behind is currently working in HK (I think) and he chatted Shan up a bit. Seemed like a nice guy. 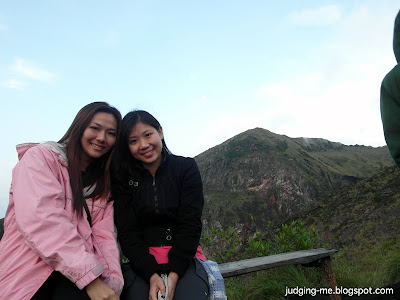 At the top with Wei Shan! I think I look odd in this photo. But regardless, it’s the best I have of me at the top. So there. Don’t judge. 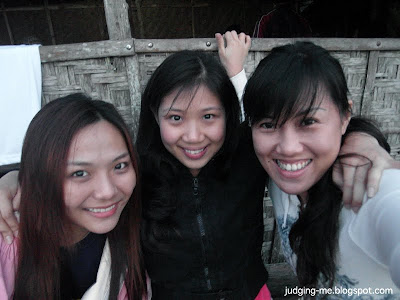 And this photo of us three. Precious. :) Nvm that I look super ugly here. But, hey, 2 hours sleep the night before, 3 hours of climbing, and at 8am in the morning, one can hardly look their best. :P