Last where we were at the previous post was kayaking merrily in Lan Ha Bay. 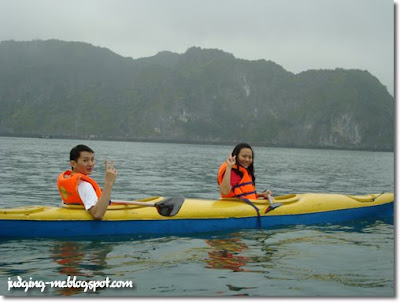 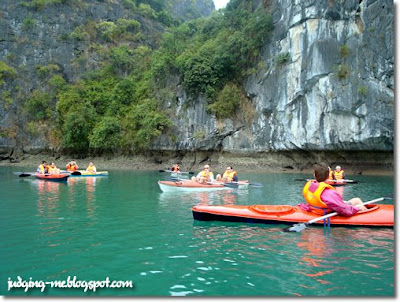 Such a beautiful lagoon – our midpoint.

So… to pick up from where I left off, disaster striked.

ALS did it again. He did something odd again.

See we were paddling merrily through some tunnel when we all heard a very LOUD “CRRRRACCCCKKK!!!!” This was shortly followed by Kerk’s very prompt “OHHHHHHHH ALS WHAT HAPPENED!!!”

No they didn’t capsize. LOL… (sorry couldn’t help it)

Being the impatient person I am, I insisted he tell us what happened.

Without any choice left, he showed us his (what do you call it…) “paddle stick”. Don’t be dirty minded. I don’t know the exact name of the, well, dammit, the “stick that we use to paddle”.

God, the guy broke his paddle “flap”. Kerk started laughing and said that just moments before, the “commando” (we make fun of how ALS likes to take charge when it came to kayaking”) in ALS told Kerk not to paddle too deep into the waters because we were crossing shallow grounds.

And literally moments later, ALS got his paddle “flap” stuck between some shallow rocks underwater and it well, BROKE.

I nagged that we should turn back to get it back. He said he cannot see it anymore (when he didn’t even go back to look).

Then I insisted that (now I sound very domineering) he go tell the guide.

So fine, they paddled quickly forward to catch up with the guide to tell him. Luckily just right ahead of us was the mid point of our kayaking adventure and we had to turn back to the junk.

So we told Duc (the guide) and he said we may be charged for it. Asked us to show him where’s the paddle “flap”, maybe we can go retrieve it.

The guide paddled so quickly ahead and didn’t wait for Kerk and ALS who had trouble getting through the tunnel without hitting the sides of the walls – well, they did only have 1 and a half paddles. So what’s with the offer to help us find it!

NVM. We let them paddle ahead while Roman and I strained our eyes to find it.

Of course, it didn’t help that the stupid paddle flap was black in colour, allowing it maximum camouflage amongst the seabed full of dead corals.

Roman was just mumbling how we might not be able to find it when I spotted it. He said it was a rock. But no, upon closer look, it was REALLY the paddle “flap”!!!! Just lying there in the water!

Don’t ask how we tried to get it out without getting off the kayak.

The water was about waist deep only.

It was not easy to steer our kayak into the perfect position to retrieve the paddle. We spent a lot of time here. The others paddled right ahead while again, to my surprise, the Iranians stopped to help us!!

They were damn bloody sweet.

How many of your fellow friends can you say will do the same for other acquaintances?

Added to the mix, the Iranians had no qualms getting off the kayak and getting wet in order to retrieve it. ALS didn’t even think of it! Admittedly I didn’t think of it either – well it would have been a last resort and ALS definitely would be the one getting in first if I had thought of it!

Here’s some shots of the “GREAT RETRIEVAL” in process: 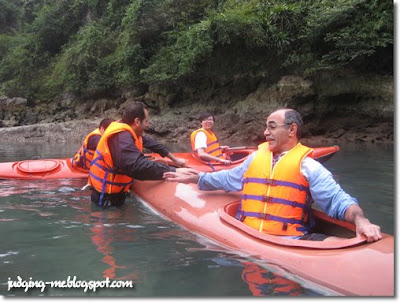 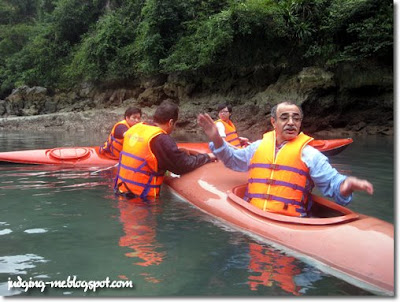 It was amazing fun and we laughed a whole lot throughout the whole process. We were great friends after it all too.

So while the one of the Iranians tried to get out of the kayak, the other guy fell out as well. As a result both of them got wet and their kayak was flooded.

Well, since their kayak was flooded, what was to come next was inevitable.

They were using my fairprice plastic bag to scoop water out of their kayak!! 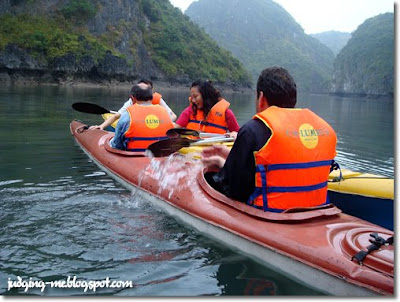 What a misadventure we had! Looking back on it, I believe, thanks to ALS, our kayaking trip was that much more funny and memorable.

This is definitely a story to bring back to the rest. *shakes head*

And all that happened was just the morning half of the day! We haven’t even had lunch at this point!

But wait! How can this post end without a smug shot of ALS and his doomed paddle. 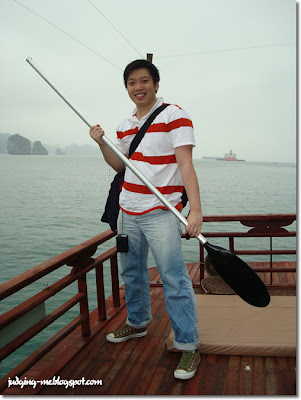 If you missed my earlier editions about my Hanoi Trip, you can click here for more! :)