Early morning at 5am in London, I woke up with a heavy mixture of dread and excitement. Today (6th May 2008), I make my way to ROME. My dream my dream! 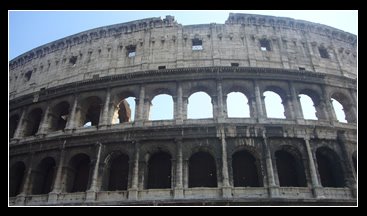 The amazing Coliseum (Colosseo to the Romans)

When I think of Rome, I think of Gladiators and the eternal city’s ancient centre, the ruins that have been immortalised in countless images – the Coliseum. The bloody amazing structure from 2000 years ago and is still standing proudly and arrogantly looking out at all of Rome. This gladiator said he’ll keep me in Rome! =)

I travelled by Ryanair.com @ £41.36 nett per person from London Luton to Rome Ciampino. The flight was short and uneventful. It was the first time I flew on a plane with my passport kiaped underneath my thigh (for what little safety it brings to my passport -_-“) and reached my destination like within 2 hours!

I still remember the feeling I had when I first touched down on Rome soil – excitement, anticipation, bloody lucky, disbelief and utter happiness. I previously booked coach tickets from Rome Airport to Stazione Termini (town centre) online with Terravision @ £6 nett per person. It was a mistake. There were 2 bus companies serving this route and I should have just waited to see which queue is shorter and buy on the spot. I didn’t wait because the site said that I’ll save 1€ per person if I book online – and that’s NOT true! #$%&(@#*$ They were selling it at the same price!

So so, finally I reached Stazione Termini and went to hunt for my hotel Siggnorio Sunny. We chose this hotel because it’s run by a chinese and can speak chinese! So why not?! We got the room at 79€ per night for 2 nights.

There is no time to be wasted. The Great Roman Empire was waiting to be discovered so off we went as soon as we could.

We stopped by this pizzaeria called Pizzeria Del Secolo (which also means the Pizzeria at Secolo Street) and stepped in gingerly to try our first attempt at ordering Pizza in Italian. 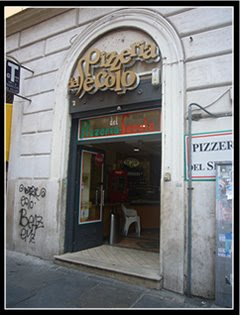 The pizza was GOOD. No, really GOOD. Check it out. 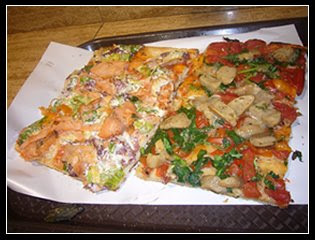 Smoked salmon with veg on the left and tomatos, mushrooms pizza on the right. Equally yummy!

It’s costed by the weight so we told them we wanted 2 slices of each flavour. They weighed our pizzas and it came up to 10€ nett – Lunch for two! Initially I thought it was expensive. The longer we roamed in Rome, the more “reasonably” priced it seemed.

No other city in the world has as complete an archaeological field in its urban centre as Rome. Nestled between underground stations, café terraces and the traffic are monuments like the Coliseum, the Arch of Constantine and the Forums, historical treasures that still guard many secrets.

The metro system in Rome was pretty easy to figure out (only 1€ for a 75 mins ride on the metro/buses!) and we were soon on our way to see the legendary Coliseum. I got to warn you if you ever go by this way. You simply have to be prepared when you exit the Colosseo station because the Coliseum is so near and so magnificently gigantic, it will take your breath away. You will be simply stunned by its sheer size and the rich history it represents. 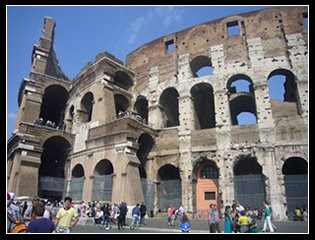 For some people the route through the ruins of Rome might offer nothing more than myriad piles of deteriorating stones. Others, however, whose appreciation for history is greater, consider this route to be the most essential Roman experience, a chance to see the remnants of an empire that once decided the fate of half the world, remnants that tell the story of Roman city life more than 2,000 years ago.

Ducky was gawking excitedly at what he’s been reading all his life – the Roman Empire.
I was THRILLED to see for myself what history books all shout about. Seeing and experiencing is way more interesting than reading! 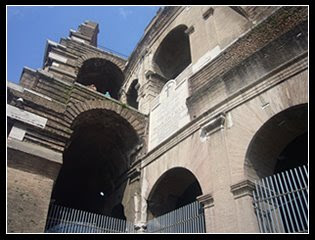 The entrance.
It is without a doubt the most impressive building in Rome. The construction of the Coliseum, originally known as the Flavio Amphitheatre, was ordered by Emperor Vespasian in the year 72 A.D. It was only later called Colisuem because of the colossal statue of Nero which was located at the amphitheater in ancient times. It is a pity that it is no longer there.
The Colisuem was built within 8 years and lo and behold – a true architectural marvel with dimensions that were absolutely spectacular for its time: 57 metres high, 190 metres long and with a circumference of 527 metres. I mean, it is still standing 2 freaking thousand years later! 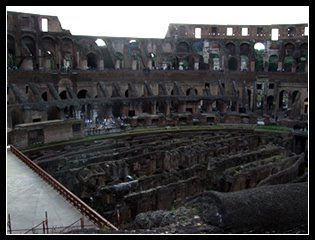 The Coliseum was built to be the greatest theatre in the world, an ambition it achieved more than successfully. The Romans had a rather different concept of theatre back then and harboured a special fondness for bloody spectacles. The Coliseum played host to innumerable, deadly games, including gladiatorial fights and exhibitions of exotic animals brought over from Africa. Giraffes, elephants, hippopotamus, hyenas and lions were sacrificed in the Coliseum’s arena every day. 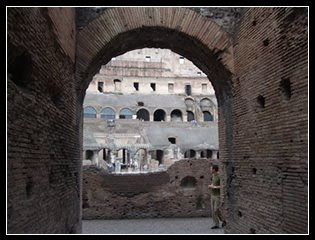 The animals, however, served another purpose before dying. Individuals belonging to the ostracized social classes, such as slaves, Christians, prisoners of war, criminals and petty delinquents, were tossed into the arena to fight the wild creatures. 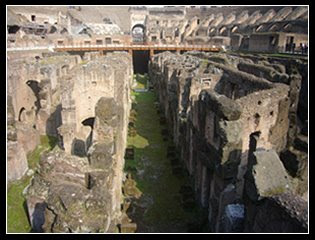 While the bloodbath unfolded on the sands below, the audience amused themselves in the stands, laughing, gossiping and enjoying the deadly show, just like how, erm, we enjoy the theatre these days huh! 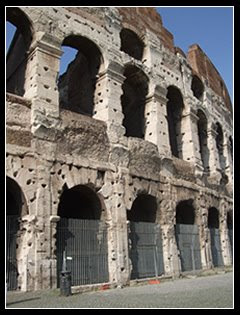 Over the years this beautiful monument declined due to earthquakes and pillaging. During the downfall of the Roman Empire, there was a shortage of building materials. The Coliseum was turned into a quarry for the construction of other buildings like the Palazzo Venezia and
supposedly the Vatican as well!). There are so many holes all round the Colloseum walls because in it’s glorious times, it’s entire exterior and interior were covered with marble slabs and it was all held on by iron bolts. The ransacking of the structure didn’t even spare the iron bolts that connected the marble slabs. What was left, is what we see today. But even so, it’s not difficult to imagine how amazing it must have been in it’s glorious days.

Despite its horrific past, years of neglect and the semi ruinous state it is in today (although some renovations have been undertaken), the Coliseum has not lost its power to mesmerise and remains the most significant and unmistakable landmark in all of Rome. 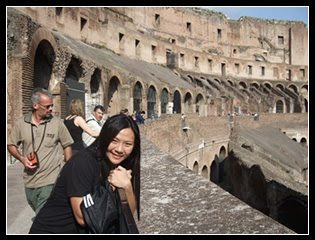 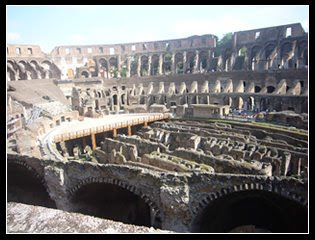 The Coliseum was also an insight into Rome’s ruling classes. There is a podium that was for the exclusive use of the emperor and his entourage, which included senators, magistrates and the vestal virgins (more about this interesting “label” later!). The rows below the podium seated the middle classes and the lowest rows, those with the worst visibility, were designated to the plebeians.

Ironically, these are the rows of greatest interest today, because they provide a close look at the stage and the many, underground passages beneath the rows, where men and animals waited for their turn to enter the arena. 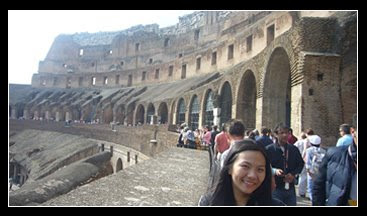 And more of the Colosseum at night. The wonderful night pictures… 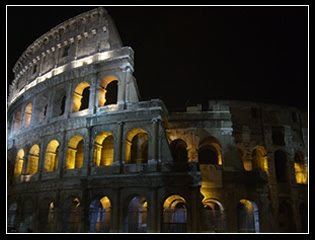 One must return to the Colloseum at night to see the perfect blend of the old and the new. The lighting only emphasised the grandeur of it all. 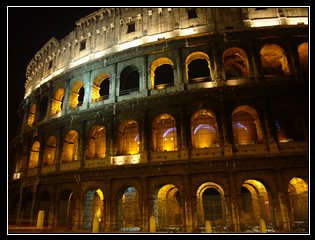 Here we see the Arch Du Constantine below. Built in the year 312 under Emperor Constantine, it was conceived as a symbol of triumph, a celebration of one of his many victories. However, the majority of the sculptures decorating the arch were added later by emperors such as Trajan, Adrian and Marcus Aurelius, who took advantage of the structure to commemorate their own success. 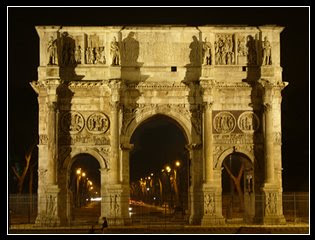 The arch’s central location between the Coliseum and the Forum area makes it one of the most visible and unmistakable monuments in the city. 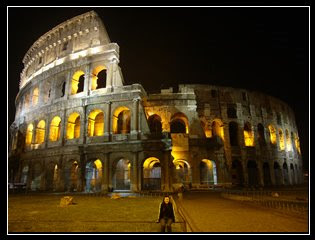 Look at how tiny I am in front of the massive Coliseum.

Long queues are a common sight any time of the year, but seeing the inside of this structure is definitely worth however long the wait. After all, what’s a queue, compared to the 2,000 years of history that await inside.

When I was there, there was no queue (probably because it was late, about 4pm already). Another way you can skip the queues are by joining a tour group. There will be many around. Just ask around for prices and make sure you meet the tour guide so that you know if you’ll understand his accent. Every single one of these companies will say that their tour guide is native English speaker. Double check the one you are going to make a deal with.

After the Colisuem, we were brought to the Palatine Hill for a complimentary (I bet it’s already included in the fees I paid) 30 mins tour. On this first day in Rome, we also visited the Imperial Forum. I’m in the midst of compiling photos for those so hang in there!

This site gives VERY good information and tips about visiting the Colisuem. =)

Here’s my tip: Money changers throughout Italy charge commission. For every $100 you change, you are charged $10. So change money before you go or do like I do and sign credit cards all the way or withdraw money actively from ATM machines (called Bancomat in Italy). If you have an account with Citibank and you withdraw using your ATM card at an overseas Citibank Bancomat, there is no transaction surcharge. =)

Haha! That means I will be digging at a level way lower than his – well, since Dinosaurs came first!