Since the last review I did of High Noon, I’ve fallen in love with the game even more! And yes, one month later, I’m still at it!

I took some photos of the game I partake in everyday. 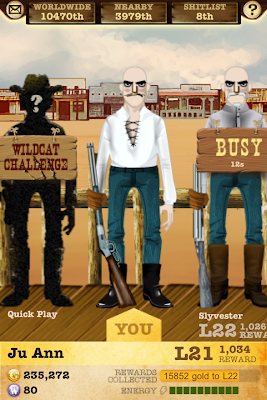 Seriously, if the developers have a tracking mechanism (which they probably do), they will see that yours truly logs in like more than 10 times a day.
My friend even sent me a telegram saying, “Eh you very free ah? Keep logging in and out looking for trouble…!!”
Haha! Btw, kuddos to the developers (Happylatte). This is one game that has consistency IN YOUR FACE. From the mini contests in-game, to the items, to the telegrams from the POSTMASTER and right down to the notification messages… it all has the same theme throughout.
Copywriting for this game is ace. 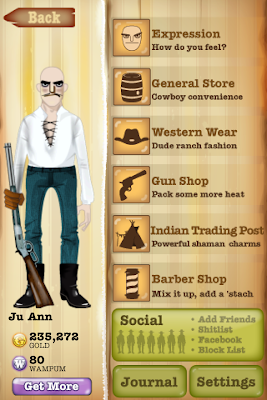 This is my character – looking like a faggot with the hat and the lack of hair. Haha! But I emphasize, it’s the SKILL that counts! 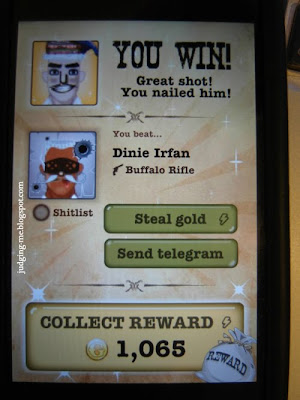 Like this. Haha! This is the screen you see when you win. I wanted to take shots of how the in-game looks like from my screen but I’m taking my wins and losses very seriously so of course, while playing, my hands are occupied.
And if I lose, this is how it looks like. 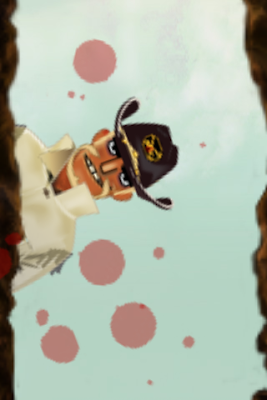 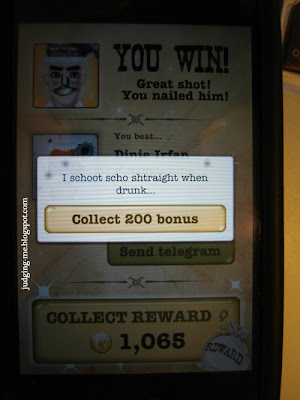 Oh yes, the beer fest. October, in our real lives, is beer feast month! And I love that they brought it to the game as well. And their little contests like these are plenty and often. These contests gives all players the reason to keep playing. For example, for Beer Feast, Beer (when drunk during a fight will heal you) must be drunk during a fight and users get 200 gold bonus! Top 1000 beer drinkers get free Wampums!!!
Contests gives us new goals, new things to do and to buy! I especially loved the one about choosing sides (held in Sep 2010).
There is this also little side activity that I can do which is to “STEAL GOLD“. It’s too simple to steal. Just click “Steal Gold”. Haha and this has caused much laughter and frustration among me and my friends. People around me must mistake the objective of this game to be stealing. :P 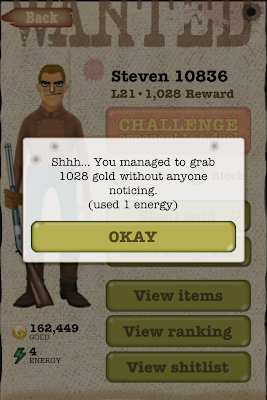 Oops I did it again.
I once laughed uncontrollably when my poor friend sent me a telegraph pleading me to stop stealing from him! And another time, I spotted my friend spending 600 gold to buy a safe to protect his SUM assets of 2,000 miserable gold! LOL So farni really.
My colleague even once set an alarm to wake at 6.30am, just to steal my money!! Grrrrrrr!! But in return, he was tired from chasing time this way. Wahaha! He thought he could sleep after stealing money but he kept thinking about how angry I’ll get and I guess he was satisfied that way.
Seriously iPhone users out there, if you have not played this game, what are you waiting for?! DOWNLOAD IT, get competitive and get uglyyyyy!!